Here's a useful greasemonkey script that does that: http://userscripts.org/scripts/show/6664
Posted by Yy at 9:13 PM No comments:

I was watching Indian Television last week and was pleasantly surprised at some of the programming. It was a show about job talk. The show was on a Telugu channel, but the programming was almost entirely in Indian English. The host talked about many useful "tips" to make oneself employable by an employer. My initial reaction to the tips approach was..."she must be kidding me." But I soon realized that its going to have a tremendous impact on students just entering colleges and thats how I try to contain my surprise at the fact that things are going to be vastly different in a matter of five years.
Posted by Yy at 8:05 AM No comments:

No one deserves a tragedy 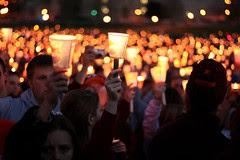 We do not understand this tragedy. We know we did nothing to deserve it, but neither does a child in Africa dying of AIDS, neither do the invisible children walking the night away to avoid being captured by the rogue army, neither does the baby elephant watching his community being devastated for ivory, neither does the Mexican child looking for fresh water, neither does the Appalachian infant killed in the middle of the night in his crib in the home his father built with his own hands being run over by a boulder because the land was destabilized. No one deserves a tragedy.

On a different note, the gunman was initially identified as "foreign", then "Asian", then "South Korean" (who could barely speak English??!!!). Washington Post identified him as a "Fairfax man" in a couple of posts. The majority of press now just says "the gunman". KQED's Pacific time has an interesting story on the reactions when he was pronounced "Asian".

Scattered pearls on a DC metro

A concert violinist and a modern maestro, Joshua Bell, received the Avery Fisher prize this week in New York. Washington Post conducted this little experiment of making him play in a Washington DC metro station during rush hour for loose change like a street performer. Mr. Bell played greatest pieces created by mankind like Johann Sebastian Bach's "Chaconne" and Franz Schubert's "Ave Maria" for about 50 mins.

Guess what!! Just seven ppl stop to listen and appreciate the music and only ONE person recognizes that it is Mr. Joshua Bell. Fascinating story!!

I vividly remember one such embarrassment. When Violin Maestro TN Krishnan came to Pilani in 1999, there was expected to be a crowd. But there were around 20 people and barely occupied the first row in the huge auditorium. For the Immanuel Kants of the group, here an pseudo-epistemological question, which is more embarrassing?

But I am sure the Bell story would have taken a different turn if he played on a Saturday afternoon in Union Square, NY or SF.
Posted by Yy at 6:15 PM 2 comments: 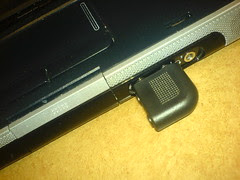 Splitter Hack
Originally uploaded by kaysov.
Each one of us had windows startup music blare in public places at least once or twice. Here's a little hack to avoid it. Just keep the headphone jack splitter always plugged in.
Posted by Yy at 8:22 PM No comments: