Chavez on US soil?

Clearly, Chavez' talk was way-way-way over the 'line'. Republicans chosfe to disrespect it without a response and Democrats criticize Chavez for stealing their job. The thing I fail to understand is this particular criticism: "Dont come to my country and attack my president".

Now, I dont know how to interpret the above criticism. Does it assume, to the point of being arrogant, that UN is part of US?
Posted by Yy at 11:39 PM No comments: 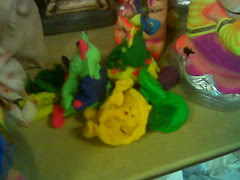 Playdough Ganesh in a Sunnyvale Hindu temple
Originally uploaded by kaysov.
I like the way, this playdough making of Ganesh encourging participatory religion. In India, this scaffold ganesh is usually made with clay by more traditional potters (not the Harry ones).
Posted by Yy at 2:06 PM No comments:

Munnabhai - Barney for the masses

Some random things to say about Lage Raho Munnabhai:

Now that we have lots of books in the open domain on books.google.com, we can expect a surge in quality/quantity of contribution to wikipedia. Monitoring quantity is quite easy, but the classic problem of quality of information remains. However, an added dimension would be the new references to those books in the open domain. I will try to see what happens with _a_ particular entry when these newly accesible references are used.
Posted by Yy at 5:49 PM No comments: