I am 'Keshava' guy in this latest episode of a popular desi podcast called "Desi Dilemmas". The producer of the podcast reads out one of my earlier post on Hindu temples in United States. Tell me what you think

Amazon has a new service called unspun that crowd sources compilation of various best lists. The idea is get people vote and sort the different categories by votes. Its ajaxified, built using ruby on rails and asks for a login before it lets you vote. I tried to find out if the number of votes has any correlation with the size of its wikipedia article (if thats any measure of popularity). 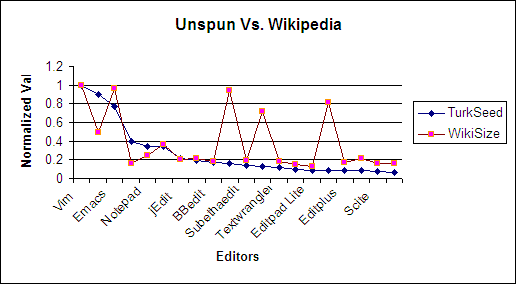 Clearly, the wikipedia-size curve has spikes like Word, Openoffice, Corel and valleys like notepad and Ultraedit. On the other hand, if the table is sorted by wikipedia-size, textmate is a prominent spike on the vote curve. Well, its the same crowd, does it make sense for these to smoothen out? May be, yes.

There's probably some alpha-beta user bias in the voting at this point as seen in this favorite subject list or Patrick Stewart (above Marlon Brando) in this list. But that should even out as this service becomes popular. While its easy to normalize and give them a letter grade, I wonder how a letter grade approach would work as opposed to ranking them. I find it hard to rank Marlon Brando, Robert De Niro, Al Pacino, Jack Nicholson, Tom Hanks, Kevin Spacey, Dustin Hoffman in a particular order. Now bring in non-Hollywood actors like Sivaji Ganesan, Amitabh Bachchan, Kamal Hassan or Toshiro Mifune. It only gets harder. I find it lot easier for me to give them a letter grade. Grading may be less mentally taxing than ranking and hence increase participation. On the other hand, grading doesn't pump up enough adrenalin for most users. Its probably not enough incentive to campaign for a better rank of their favorite item. Anyways, keep exploring and comment some of the interesting lists you stumble upon.